In the series of Arbeitszimmer-residencies in the COAPPARATION program, the last scheduled studio grant, has been awarded to Hysterical Pixel - an alias that is as suitable in the singular as it is in the plural - for Lisa Rein. Their project, with the working title Hot Network Questions, will explore the symbiosis of computer forums as a gathering place for the brogrammer scene and the paradigm of programmability as part of their research on digital infrastructures. "Bro" as in Brother. With this transformation of P into B, of programming into a brotherhood, a cultural terrain is claimed that is not neutral in gender and still widely unacknowledged. For example: stackoverflow.com is one of the most used internet forums for questions about programming languages and computer technology. Lisa Rein is interested in the Hot Network Questions format offered there, which present the "best" questions from all forum entries at the right edge of the screen. 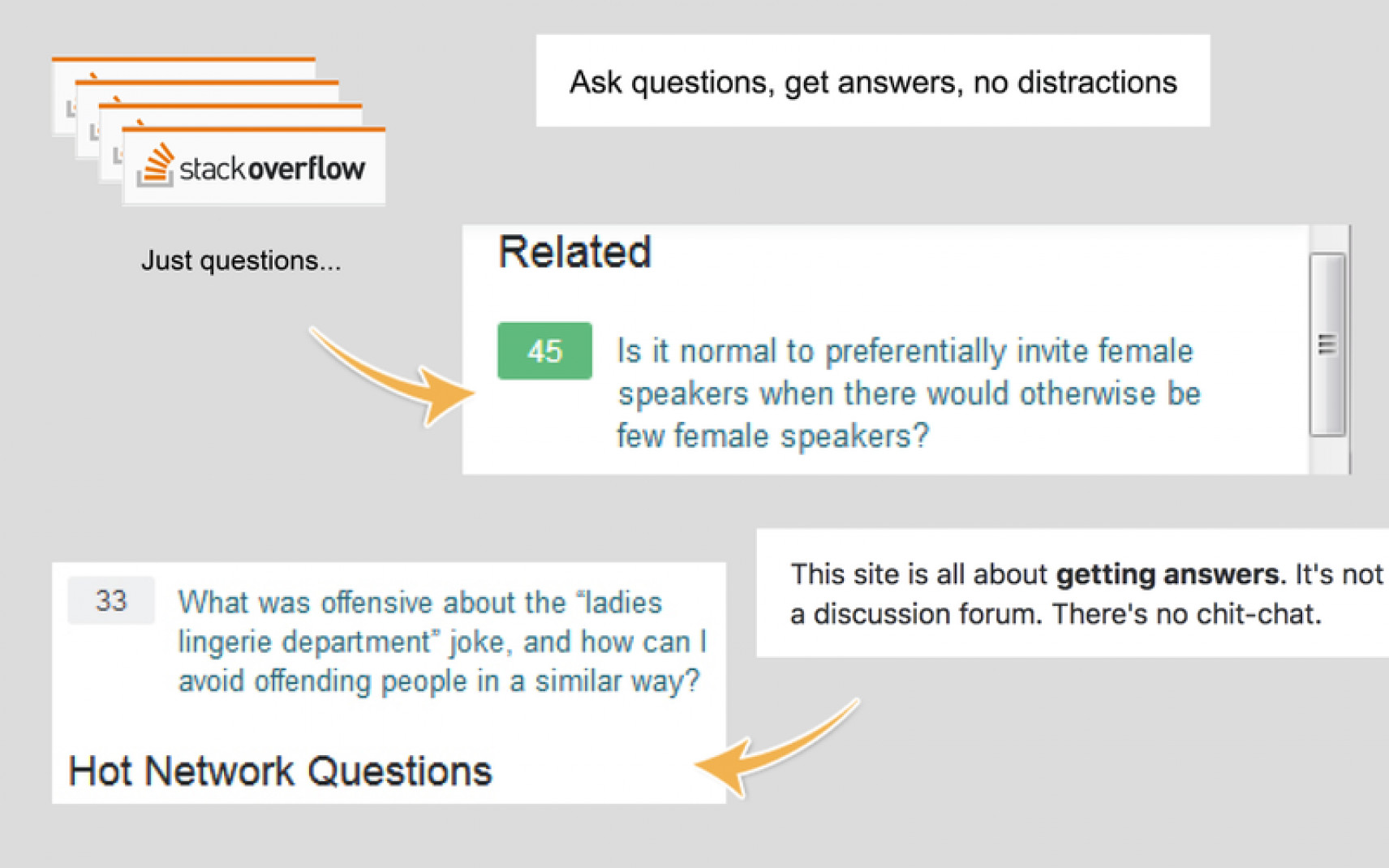 Stackoverflow functions here like a responsive automaton, which does not order answers to a conversation chronologically, but according to their supposed value. True to the logic of the Computational Universe (N. Katherine Hayles), not only numbers can be sorted along a scale from 0 to 100, from good to bad, but all sorts of other complex elements, such as the posts in a conversation. The will to automate human communication in this way produces overload, or stackoverflow, as the name of the forum finely anticipates. Lisa Rein puts it this way:

"[M]any times I threw questions myself into the maw of the answer generation machine [of stackoverflow], usually got back a many-voiced roar, and captured in screenshots what I could before my posts were deleted by users with more reputation. [...] During the studio fellowship, I will sift through [this collection], expand it, and strive to find a form for it. When I think about it, suddenly the documented snippets of chat conversation become a dialogue in space, a theater, a communication machine, or a cyberfeminist collaboration."

COAPPARATION* -Lab has handed over Arbeitszimmer thealit to a new studio grant holder. From January 22 to February 16, Maria Karpushina and her invited project participants will examine the exhibition practice of the Überseemuseum in Bremen. It is the first part of a museological intervention that critically and experimentally questions the very act of exhibiting. The title of the entire project Altering Neutrality indicates that it will be about the blind spots of a supposedly neutral educational mission: "the object is presented against a neutral background, and the client focuses only on what they see."- The Metabolic Museum, Clémentine Deliss, 2020.

The exhibition background, as it is omnipresent in museum history, is in fact always supposed to be (ideologically) neutral and 'facilitate sensory perception'. However, far from being neutral, this means aggressively rewriting the history of an object, maybe cutting off its roots, the net of references and meaning. "Dismantling the neutral background" implies that the neutrality of the exhibition space, as demanded by tradition, is questioned.

"Backgrounds are a source of fiction, which is revealed by questioning various actors who, by testifying to the existence and permanence of this fiction, at the same time make its dismantling conceivable," Maria Karpushina comments. Or: history, especially colonial history, is told in museums, and whoever recognizes this can try to change this story.

COAPPARATION -Lab doesn't stop for holidays. (Like art.) Already on Sunday, December 26 Yuliya Tsviatkova starts her studio grant at Arbeitszimmer thealit. A starting point for her project can be found within the thought: “My body does not belong to me. This biological substance is shared between me and other organisms. I do not exist without them, they do not exist without me. To me my body does not belong.” For sure, any body exists only in various forms of extrinsic perception. Similar maybe, but not identical – for: “To whom are you more alike? dad-like, no, more mom-like. No, definitely grandmother-like’’. It's hard for me to tell exactly what I look like… “My grandmother runs her fingers through my hair and says: 'You shouldn't have cut it.'"

Yuliya Tsviatkova aims with this project different ways of “sharing” her body – from family projection to microbiological composition. One part consists of reproducing her body – in life-size fabric as a kind of anti-stress toy.

On display are installations of textile-made body parts - measured on the artist's body - designed as anti-stress toys, motif embroideries of physical trauma on long gauze web, a sculptural work of anatomical forms made of cast latex. And more... Coming by and looking (through the window) is worthwhile - who else would know, in porous times of change, where inside and outside, mine and yours, body and space are?

"If critical deconstructivist approaches emphasize the importance of language, text, discourse, and structure, performative arts feature works with the present body that simultaneously refers to more and exclusively to itself," writes Anngret Schultze with pointed contradiction. In her thealit project, text and body are to come into contact with each other and be exhibited in poetic form.

1. On the window front of thealit Arbeitszimmer (St.-Jürgen-Str. 157, Bremen) as a multilayered, spatially staggered video projection.

Look! Besides, Anngret Schultze continues to work inside - maybe curious about your comments and questions? (Try and knock …)

2. there is something to discover from her work on Instagram thealit_fkl. Anngret Schultze posts more videos and texts to her project, this much is already revealed.

The improvisations of the participating dancers Franca Burandt, Gabriel Obergfell and Ton Bogataj were created with a 'score': a text by the artist that the dancers translate into movement and give physical expression.

COAPPARATION* takes a new turn in November with fellow Hannah Wolf and her project on delivery services and the people who deliver goods. It's all about bodies that perform delivery services in the centers of cities.

To this end, she interprets the components of the art word COAPPARATION as a whole negatively, insofar as one "[ends up] in neoliberalism. The cooperation, participation in an enterprise for the purpose of increasing capital. [T]hen I think of flows of goods and those who move them. [...] On the assembly lines, the ports, trucks, transporters, and then just the bicycles. These bodies, the mediators, move through the urban space carrying the loads that become joy at the door of others. [...] [O]f course, one is not supposed to see the burden that goes into this activity. What goes is moved to the outside of the cities.

Alexandra Tatar has been following traces of her grandfather's work in Germany some 50 years ago and brings back new experiences, artistic analyses and results. Guided by the family interviews, she allows her paths to overlap with those of her grandfather, forming the contours of uncertain crossings. The shifts and gaps as found in her grandfather's recollections meet their critical and poetic reconstruction by the granddaughter's video work.

This interview is the first part of the project, Sorrow, at the Traffic Year by YeLa An.

Four Korean artists share their racist experiences and their thought of the double oppression as Asian women in Austria and Germany before and after COVID-19. Indeed, they narrate why they thematize Asian female identities and Asian bodies in their artistic works. 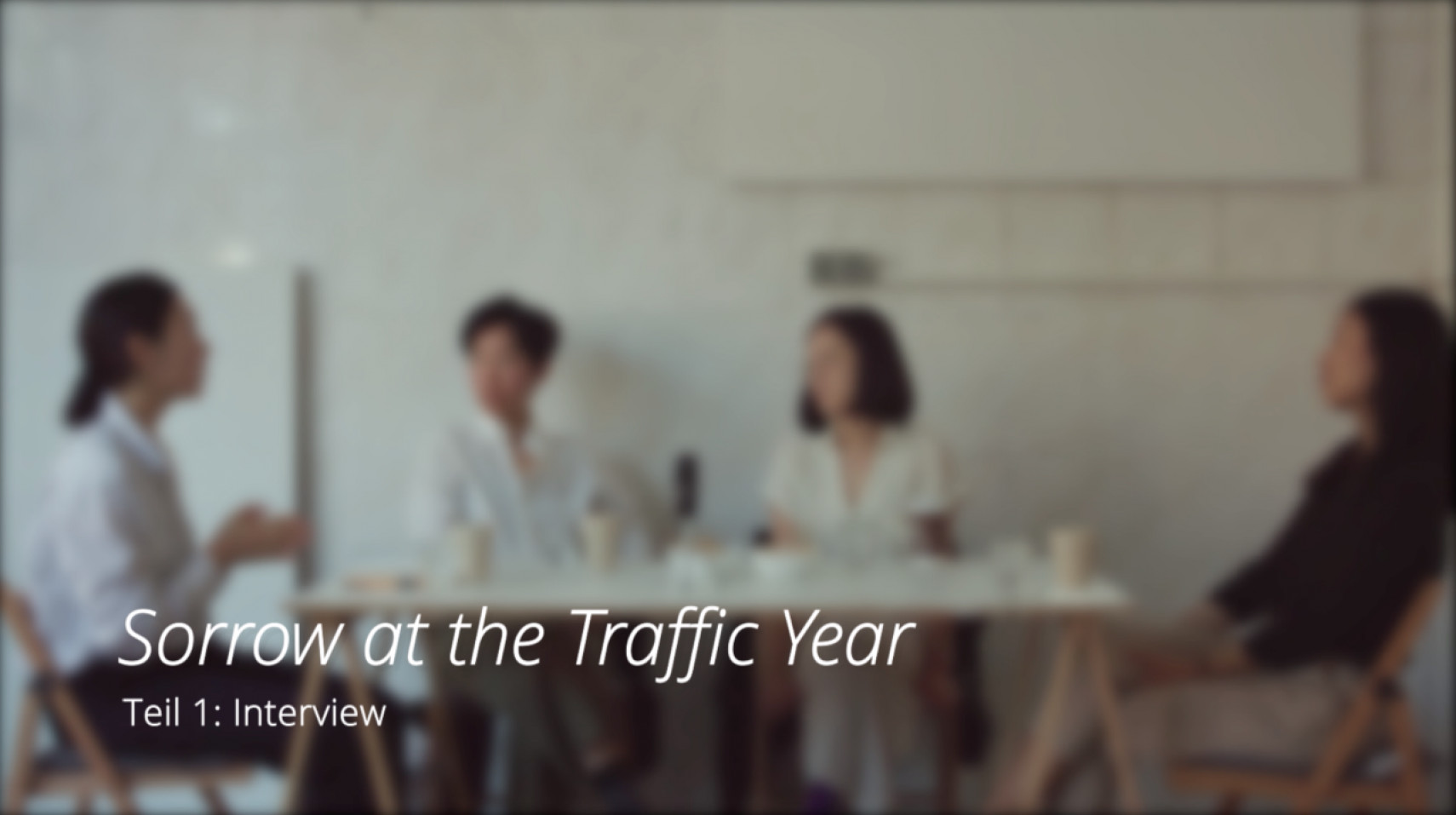 YeLa An currently based in Vienna, Austria. She studied post-conceptual art with professor Marina Grzinic at the Academy of Fine Arts in Vienna.

_For many years, she has been creating artwork concerning the mass media's former images of women and how they reflect the current state of gender (in)equality. Besides, her interest lies in analyzing the present representation of Asian women within Asia in relation to the occidental gaze.