We are offering a four-week-long studio residency in the thealit workroom* (St.-Jürgen-Str. 157/159, Bremen) to six different female artists.

The artists will be invited to work with or react to the theme of COAPPARATION, in the broadest sense.

To publicize the works—which is not obligatory—the large window of the workroom (the shop space) can be used, as can the thealit website and other digital publication channels. It would also be possible to take over the Thealit Instagram account.

The Project by Yara Mekawei in dialogue with Farzad Golghasemi captures photos, compositions and texts on a total of 9 Bremen architectures.

Sound is everywhere, that it is like air, but rather that it is more diffuse, and deeper impact, that air has a sound, and the sound is alive to die, never-ending, that the sound never silences. Over the years, the relationship and analogy between music/sound art/sound design and architecture have been explored in several aspects. In the same way, architecture works over the solid materials, visual spaces, geometry, abstract realities, or social contexts, it does over the aural realities, the sonic dimension. When it comes to space, sound can be valued in an architectural process, just as architecture is also sonic.

"on horizons" – such the project's title of the current studio grant from thealit's COAPPARATION, starting on Thursday, February 11 – March 11 for the artists' duo leer&gut, aka Esther Adam and Katharina M. Greeven. They note: "The horizon – a line that separates the sky from the earth. This becomes the metaphorical setting for an investigation into appearance and disappearance. Your (own) horizon is always a question of position and perspective." And they put, no sooner said than done, a beautiful horizon in between the words:

leer&gut are a multi-tool, researchers and material-hungry. Two, morphing – sometimes disappearing into each other, sometimes appearing separately. They work with the questioning of cultural gestures, displacement, and the shifting and restaging of everyday objects and movements. In their genre-spanning works, they negotiate themes such as (in)visibility, power structures, corporeality, and vulnerabilities. 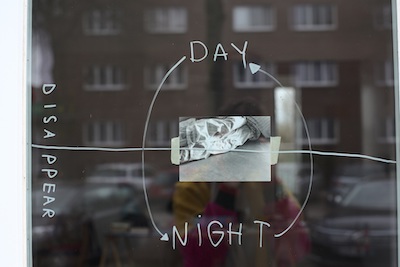 Questions and registration please until March 4th by mail via leerundgut@posteo.de.

You will receive a confirmation email with further information and a link. Unfortunately the number of participants is limited to 12 people. We will speak German and English spoken language.

Are you thinking about the night?

I get less text messages at night.

We should bring each other to bed.

Do you think about rituals?

No about a feeling of security.

I think about reading aloud.

Did you fall asleep? leer&gut invites you to a pack sleep, to an online pajama party. Together we want to slip into sleep and wake up.

Falling asleep, slipping out of wakefulness. Waking up, reappearing every day anew.

Questioning and examining the intimacy of sleep. Come with(out) make up, in your favorite pajamas. Bring a toothbrush, a book from which you maybe would like to read.

In the evening: lecture, reading aloud, sighing and yawning

In the morning: waking up, morning pages, brushing teeth 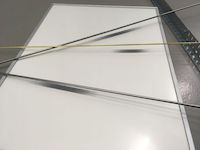 Sie fragt nach der Rolle von Geschwindigkeit in medial geprägter Wahrnehmung und im Umgang mit Gegenwärtigem: „Here is where I understand the term ‘coapparation’ coming into play, as it deals with the way in which we, as a collective, understand ourselves and one another at a moment where very little time is dedicated to considering the detail or nuance of communication.”

On Wednesday we are invited to listen to Konstanze Spät's live interaction with sounds from thealit's Arbeitszimmer on a sound piece of SCENES OF OSCILLATION, adressing a zone that oscillates between seemingly tangible verbal communication and not so tangible affect. Here, content relies on sound: „The scenery of sound is built up through different universes of language (Russian, German, English) and those bodily entities, with whom I interact through my project (styrofoam, adhesive tape, glass, seeds and stems of fruits),” Konstanze Spät notes.

Now, listen carefully! to the textual parts too. Much of this has been written since December, during Konstanze Spät's studio grant.

Konstanze Spät talks with jee chan, an artist, dancer and choreographer from Singapore/Berlin. jee chan's approach aims at "that which is always already there (big and true, just beneath the surface)" in sedimented histories of (post)colonial power. Experiences of flight and forced displacements inscribed in diasporic bodies are central, as lived through by jee chan's grandmother who had been fleeing from the japanese invasion to Singapore. jee chan uses public interventions, video installations, noise-concerts, sculptures, photography, texts, performances and more.

Konstanze Spät gets in conversation with Alexandra Tatar. (We heard about her already in some newsletters, as Alexandra Tatar too is granted in thealit's COAPPARATION program.) This artist from Romania, living and working in Vienna, is interested in processes of „becoming” of human and nonhuman subjects, like Romanian 'guest workers' generated by treaties between the Socialist Republic and the Federal Republic of Germany in the 70s. Can personal stories and narratives of migration further structural insights?.

Aizda Arystanbek is guest at Konstanze Spät's podcast of dialogues. Aizda Arystanbek works on gender-based violence and nationalism and for a decolonization of academia: in short for overthrowing patriarchal structures. She explains: „Borat profits from Kazakhstan's name, we don't.” Obviously the intersectional feminist from Kazakhstan doesn't belong to those appreciating the satire of "Borat" films by Sacha Baron Cohen as antipatriarchal unmasking of the USA – as it depends on how you do it. How to oppose the everyday violence of nonrepresentation, of symbolic erasure? "As a feminist scholar I do want to have my own country, my own ground in the ever-expanding sea of feminist thought."

Konstanze Spät repeats the starting point of her audio program for all those who want more and again and all of it: again she presents a live performance of her SCENES OF OSCILLATION, closing her time at thealit's Arbeitszimmer.

Art production in there becomes performative object, space becomes stage for art production. Processes of work become object and object becomes part of the process. The course of the artistic production takes place on site and becomes transparent to the outside." Transparency is meant literally too: you can watch how Branka Čolić proceeds, glancing through the window frontage of the studio and via webcam. 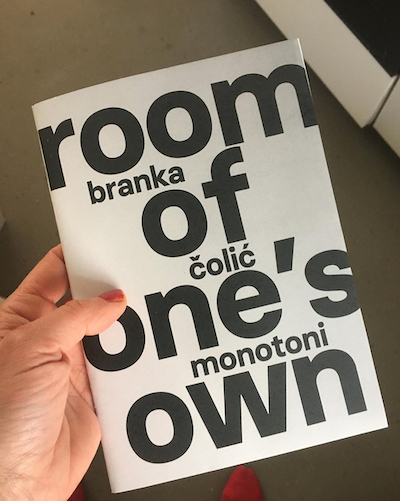 On 24th of October at 19:00 (Berlin time) we invite you to participate in a virtual excursion around the Minsk High Technology Park, which was previously a place with abandoned buildings where illegal concerts and parties were held.

We will look at the history and modern incarnation of this place and through it try to make a deep dive together into Minsk's atmosphere.

Afterwards, XYANA will hold a live interview with Uladzimir R. He was part of the Minsk punk scene starting from 2010, and is familiar with the area of the High Technology Park in both its abandoned state and as it is now. He currently works as a programmer in Berlin.

It will be possible to ask questions to both XYANA and Uladzimir R. via chat on Twitch 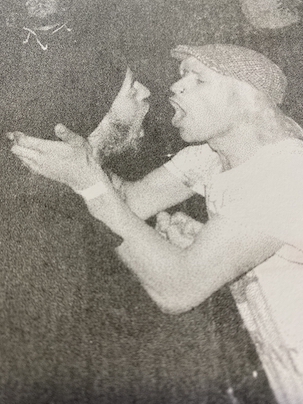 On Wednesday, November 4, passing by the window of thealits Arbeitszimmer St.-Jürgen-Str. 157-159 is very recommended. Even under the current strict Corona security measures, you can (with due distancing to other flaneurs) take a close look through the panes of glass on an installation. Duration: 24 hours.

thealit's current studio guest ХУАНА | XYANA concludes her four weeks of working on her project "FROM PUNK TO PROGRAMMER" with the staging of an abandoned squat and a presentation of pictures from the Belarusian punk movement in the windows. (Photos and Risographs)

*COAPPARATION? Cooperation is a process or behavior that can be regarded as essential for many things, ranging from culture and cultural politics to evolution, and vice-versa. Like an engine, it enables the stop and go of functional relationships, whose complex rhythms and intervals can in turn appear instrumental. In an apparition—another word for manifestation—perhaps? In that case COAPPARATION would be a little bit of COAPPARITION, because each instance of cooperation or each instance of its rejection comes down to common understanding, agreement, inquiry, hesitation, and action.

Part 3 of the COAPPARATION project will take place in autumn 2021. A series of events featuring diverse artists, scientists, and activists will be held, to the extent that health precautions at the time allow for events to be presented in small spaces. Otherwise, this format will also be adjusted, and more work will be done outdoors and with the window, in addition to the general digital presentations.